What's your go-to definition of community?

I’ve avoided trying to define community, or come up with a definition that makes sense to me.

Mostly because it makes my head hurt.

But I came across this one on Twitter and something about it stuck with me. 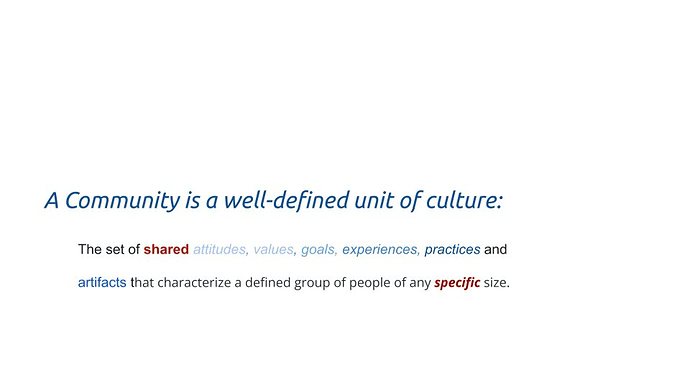 I think it was partly the focus on culture, but also it doesn’t mention relationships or belonging, and that strangely feels good.

I’ve been thinking recently that relationships & belonging are great and essential to community, but perhaps we focus on them too much. If we focused instead on the attitudes, values, goals, experiences, practices and artifacts will naturally lead towards belonging, connection and relationships.

I’m curious to your thoughts on a community definition that works for you? Or what do you think about the above one?

I think it was partly the focus on culture, but also it doesn’t mention relationships or belonging, and that strangely feels good.

Speaking as the person defending this definition, I honestly agree with you, whole-heartedly.

I never felt like measuring “sense of belonging” or “creating relationships” where viable lead measures of success for people actually “doing” the work because these are too late on the uptake. For researchers who are studying the success of a community, yes, measure these. But even if the soft skills were indeed critical to your success, spending your time measuring that late, puts a lot on the table. They’re “results.” You need to measure “results and how.”

So by breaking down the building blocks of culture, and providing a proper social-scientific scope to your community, it’s easier to wrap your head around the soft metrics that are critical. We can set aside the intangible ones for different forms of measurement. That’s what qualitative data, social currency, surveys, sense of belonging surveys, and TALKING to your members are for.

In the day-to-day, I think the anthropological definition hits on what you need to measure better. This definition forces you to ask what elements of the culture you’re lacking in:

In short, breaking down and measuring these elements of culture rather than your Community’s softer elements can guide your thinking on what you and your team can personally achieve BETTER.

I"m actually building an ENTIRE course on the social-scientific frameworks of community around HOW to implement this, so I guess stay tuned or comment here for input so I can better explain this concept in a more formal setting.

“A community is a connected group of people with something in common.”

That’s been my go-to definition of community for the last five years.

I feel like I stumbled across the less academic version of the social sciences example.

not as tidy as a dictionary definition, but I will still try:

Community is where many-to-many value sharing happens. It’s the first thing that comes to my mind when I hear “greater than the sum of its parts”.

“Community is greater than the sum of its members”?

I try really hard not to overcomplicate this, because anyone you talk to generally has an intrinsic understanding of what a community is. Community is one of the things that made humans incredibly successful, and we’ve all experienced it.

Community is the condition of having an interest in common with other humans.

I’m currently writing a newsletter for the community I advocate for (Ministry of Testing) and I just wrote this:

The Ministry of Testing community is an entity that creates crucial career sparks.

So here’s a definition. It might not be my go-to yet it’s an attempt at one.

A community is an entity that creates crucial sparks

.
.
.
.
The definitions on this topic are incredibly helpful. Thanks for sharing!

Truth be told I have also struggled and tried to make this definition work, but to little avail.

This might get long, because I guess I have nothing else to do on a Friday night, and, Ironically given the subject matter, I feel I’m among nerd-kin…

Emotionally I know that this definition…

“Community is greater than the sum of its members”?

…is a no-brainer - communities have “emergent properties” when humans act in specific ways to create them. Still, I never liked putting that feeling into a definition. This approach unsettles me from an anthropological perspective even if it warms my heart spiritually and emotionally.

Recognizing the ivory-tower in this statement, the idea that a community is “more than the sum of its parts” feels very floaty to me. Yes, it is certainly an inarguable fact that community cannot be defined in totality, but floaty is usually viewed as a hint to test more than it is a grounded statement in Anthropology. Could this fact simply be the resulting feeling of a good community? There can be bad communities—simply because they lack this pervasive reality, even if they hit on everything else to some extent.

Similar to @rosiesherry 's concern with belonging and relationships, it feels like we are defining the community as the result of mechanisms present, but not wholly accounted for.

The phrase “emergent properties” is frequently used in Biology classes to represent the collaborative functions of biological cells or tissues we do not understand yet.

A look at the accepted definitions of “emergent properties,” are:

“a characteristic that any entity gains when it becomes part of a bigger system.”

“A set of described properties that arise through interactions among smaller parts, that alone does not exhibit such properties.”

Primary examples in biology are tissue matrixes and nerve clusters. The nerve cell doesn’t have the capacity to move a muscle, but in combination with the surrounding cellular complexes, it can create a stupid amount of force and move a human arm.

So while different cells in a biological “system” are not on their own or in sum capable of the force, leverage, and energy required to make a human, they can nonetheless.

You can repeat this again with the gut microbiome and again with the biggest problem - the emergent properties of a brain that produces conciousness.

Now, applying this definition back to community…
When I bring Biology’s definitions into the context of a community, I feel like I get nowhere. Just like Neuro-biologists are getting nowhere all that fast with human consciousness.

What these definitions DO achieve, however, is create a ridiculously powerful thought engine for asking questions and exploring the problem space. I mean, just follow any line of questions starting with an emergent property and there’s loads of new research to be done.

The same happens with Community, so perhaps it’s more useful to think of emergent community traits as a question than a definition.

Combining this question with the definition I provided above…

I feel like I’ve introduced a factor I’ll never be able to identify no matter how hard I try, and yet, I will forever have a community to research. That’s very useful to a community professional, but not as a definition.

I still go by this one by Myriam Laberge from around 2007 or so (no link to the original source as her old blog no longer exists):

“A ‘community’ is created over time around shared purpose, language and meaning, and the development of shared values, reciprocity and mutual trust in the longer term from being and doing together.”

I LOVE this one!

From an anthropological point of view, there is a difference between the culture of a space and its context. A context is the description of a site you’re studying. It’s like a snap-shot in time. “Where are we now?” Culture is that context’s change over time. How it came to be the way it is, and where it will go.

I think this definition captures that difference, and also the nature of context’s impact on the community. It’s got the necessary makings of a strong day-to-day community builder. To have the language and the purpose of building meaning. To empart that purpose through values, to understand how others react to it, trust them to help, and improve.

I LOVE IT! I may use this as the new colloquial definition for sure!

Love all the perspectives here! In trying to boil it down in a way that made sense to a variety of coworkers and underlined what made it different than other efforts, I landed on this:

Community is a group of people coming together around a shared interest, situation, or goal and gaining value out of interacting with each other.

I then usually spend a little time emphasizing the “interacting with each other” portion, to dispel the idea that a newsletter is a community.

It’s very simply and not very romantic, but I feel it gets to the core ingredients.

Just came across another one, quite similar:

A community is a group of people united by a common identity and collective purpose who engage in activities together over time. Communities develop unique sets of shared values, principles, and norms that distinguish them from others and provide members with a sense of belonging.

Love how you’ve come back here to update with more, I will do the same every time I come across a definition I like.