Is this the Community-Led? Is this just fantasy? (The Commsaur Case)

How did the end of Commsaur (an NFT project started by Commsor) start, and how it ended?

A post about what happened with screenshots and tweets.

After not seeing significant effort in one year and even not one announcement for more than a month, kcaryths (one of the community members) moved the conversation from Discord to Twitter. And we got a response from the founder that said

“Hey hey we’ve got an update coming, give us a few days!” (We asked for an update on Discord before that, but this came after the tweet) 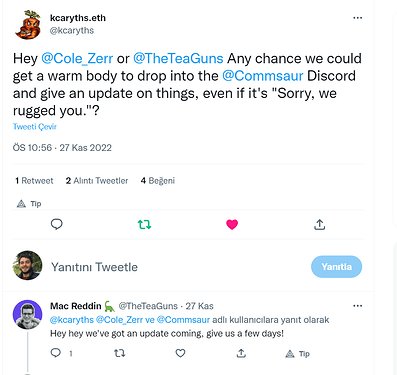 In 10 days, they made this announcement that frustrated us. (w/o using the everyone tag)

We at least wanted to see “Sorry”

After the announcement, we asked questions and showed our frustration to see a meaningful answer, but there was no sign of care from the Commsor’s side.

I wrote a post about what happened since the beginning in the CommunityClub’s Slack Channel on the same day.

This comment showed me that at least somebody in Commsor cares what’s happening. 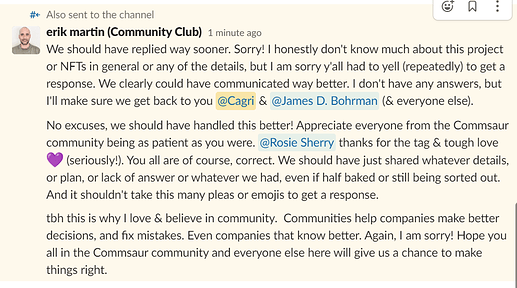 This was still not a community-driven decision, and everybody in the community should know that.

Wanted to open a discussion about it, but they had already made the donation.

He posted the announcement with the everyone tag after the warning.

At least we donated 100K$ as a community thanks to everyone who supported us during this process.

But in the final, I saw that Commsor is not “community-led” although they really like using the word.

“Community-led is just fantasy for them.”

Lol. Not sure what to say beyond my continued insistence that NFTs have nothing to do with the Community industry.